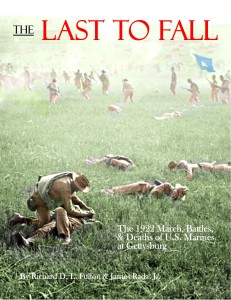 Richard D. L. Fulton and James Rada, Jr. will be holding a book siging at St. Philomena’s on the Emmitsburg Square  in April.

When were the last U.S. Marines killed in the line of duty on the Gettysburg battlefield? If you said 1863, you’d be wrong.

The year was 1922. Two marine aviators crashed their bi-plane on the battlefield during military maneuvers that summer and died in the accident.

Their story is part of a new book by Richard D. L. Fulton and The Catoctin Banner’s Contributing Editor James Rada, Jr. called The Last to Fall: The 1922 March, Battles, & Deaths of U.S. Marines at Gettysburg.

“This is a story that Rick, with the encouragement of his wife, Cathe, and I have been wanting to write individually for years,” Rada said. “We finally combined our efforts and put together something that neither of us could have done alone.”

The 176-page book is 8.5 inches by 11 inches and contains more than 155 photographs depicting the march from Quantico to Gettysburg and the simulated battles on the actual Gettysburg battlefield.

“The march involved a quarter of the corps at the time,” Fulton said. “It was part PR stunt, but it was also an actual training maneuver for the marines.”

As part of the march, the marines stayed two separate nights (going to and coming from Gettysburg) on Hooker Lewis’s farm just north of Thurmont. They showed visitors around their camp, visited Emmitsburg and Thurmont, showed movies in camp, and played a baseball game against the Emmitsburg team.

“On their way to Gettysburg, they marched into Emmitsburg and were greeted by Civil War veterans who were still living in town,” Fulton said.

While on the Gettysburg battlefield, many of the marines were willing to hike back into Emmitsburg to enjoy the hospitality there, rather than go into Gettysburg, which was much closer.

The Last to Fall also contains pictures of the marines in Emmitsburg and Thurmont.

“It’s surprising how few people know about this event nowadays,” Rada said. “It involved a large body of marines marching through Washington and Maryland and got a lot of national coverage at the time.”

Rada, Fulton, and Cathe, who served as a research assistant, searched through hundreds of documents and photographs, looking for the details of the march and battles, but the book was meant to tell a story. For that, they went hunting through lots of newspapers in order to piece together the stories of the marines on the march and the people they met along the way.

“What’s really fun is that the marines re-enacted Pickett’s Charge both historically and with then-modern military equipment,” Rada said.

The event was also marred by tragedy when something happened to one of the bi-planes and it crashed into the battlefield, killing the two marines flying it. The pilot, Capt. George Hamilton, was a hero of World War I.

President Warren G. Harding and his wife, along with a number of military personnel, politicians, and representatives of foreign governments, stayed in camp on July 1 and 2 with the marines and witnessed some of the maneuvers.

Richard D. L. Fulton is an award-winning writer, who has worked for many of the local newspapers. He lives in Gettysburg with his wife, Cathe, who was also a big help in tracking down photos of the 1922 march. The Last to Fall is Fulton’s first book.

James Rada, Jr. is an award-winning writer, who Midwest Book Review called “a writer of considerable and deftly expressed storytelling talent.” Small Press Bookwatch listed Rada’s Saving Shallmar: Christmas Spirit in a Coal Town as “highly recommended.”  He is the author of five historical fiction novels and seven non-fiction history books, including No North, No South…: The Grand Reunion at the 50th Anniversary of the Battle of Gettysburg and Battlefield Angels: The Daughters of Charity Work as Civil War Nurses.

The Last to Fall: The 1922 March, Battles, & Deaths of U.S. Marines at Gettysburg retails for $24.95 and is available at local bookstores and online retailers.