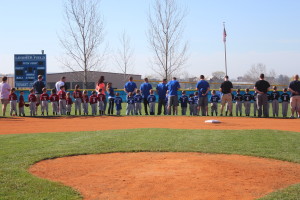 The cry rang out on baseball fields across northern Frederick County on Saturday, April 18, 2015, as the Thurmont and Emmitsburg areas celebrated opening day and held their first games of the season.

Crowds flocked to the fields to cheer on the youngsters who were playing baseball for the first time.

Brooklyn Kehne, age seven, made her Little League debut playing on the Emmitsburg Angels. She has an older brother who played baseball, also, but opening day was her time to show what she could do. “I’m really excited to play,” she said. “I like playing.”

Down in Thurmont, Ja-Khia Smith, age eight, waited anxiously in line for the team to march onto the field, amid the applause of hundreds of spectators. “It’s fun,” she said. “I get to hit the ball a lot, and my coach helps me if I need it.”

The special guest to throw out the first pitch in Thurmont was Dr. Richard Love, who threw the pitch to Gage Eyler, the grandson of Love’s former teammate, Thurmont Police Chief Greg Eyler.

“It was pretty neat,” Love said. “Although I felt like we should have been switched, since I used to catch for him (Greg Eyler).”

Love had started playing Little League in Thurmont in 1965 for the Orioles, and had been a sponsor of teams for thirty years. He and Eyler had played together for seven years.

Sean Mazaleski, age twelve, plays with the Emmitsburg Red Sox. He showed up at the fields early, as he prepared to start his sixth year of playing baseball. “I really enjoy it, and I don’t mind the practices because I get better every time,” he said.

Once the Opening Day Welcome was finished at each location, the crowds separated to fill the bleachers at the different fields and to enjoy America’s favorite pastime, with perfect weather, tasty snacks, and lots of ball hitting, throwing, running, catching, and cheering. 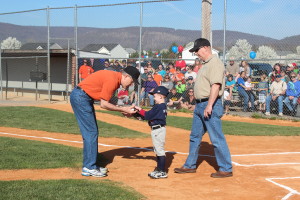 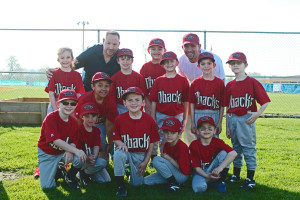 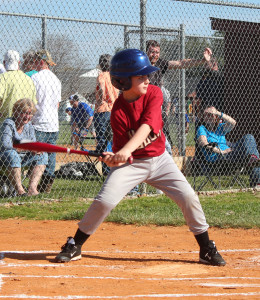 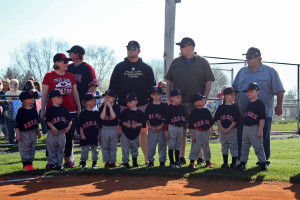