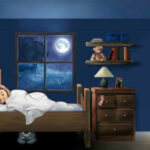 that SOME THING under her bed at night GREW, GREW, GREW.

The minute her mommy turned out the light and closed her bedroom door,

SOME THING under the bed made slithery sounds across the floor.

would pull the covers over her head, not taking any chances;

for if IT came out and tugged at her foot or grabbed her little hand,

Little Doreen grew each year and many new things unfurled,

One night as Doreen lay sleeping, upon the verge of a dream,

and hatched its ancient scheme.

But Doreen, you see, had finally grown to understand about FEAR,

not something children are born with but always in some fateful year,

some adults can tell you this, but only if they’re clever!

So, on a particular shadowy night, as Doreen lay in her bed,

SOME THING did what SOME THING does and tried to place FEAR in her head.

Oh, FEAR, you trickster of the mind, you thief of hope and dreams,

Doreen has learned some tricks of her own for foiling your boogeyman schemes.

False Experiences Appearing Real, that’s all that FEAR really is;

just stories some folks tell themselves getting all worked up in a “tiz.”

But our brave little girl chose to tell a tale, one where courage appeared,

and right then and there SOME THING under the bed shriveled up and disappeared.