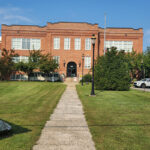 By TheCatoctinBanner.com On September 30, 2022 · Add Comment · In Community News

When Joyce Bruchey was a senior at Emmitsburg High School in 1962, the principal came into her class and asked her and another student to substitute teach in the first-grade class. It was an experience that changed her life.

“I had wanted to do something with agriculture, but at that point, I changed what I wanted to do,” Bruchey said.

She became a teacher, and the first school where she was hired was Emmitsburg. However, she was trained in secondary education but hired as a third-grade teacher at the age of 22. She went on to teach in various schools in the county for 39 years. She now serves as the historian for the Emmitsburg High School Alumni Association.

Pointing to the library’s community room, Bruchey said, “It’s been over 70 years since I first sat in that [first grade] room as a student.”

On September 17, one hundred years and two days after the Emmitsburg School first opened, dozens of people gathered at the current Emmitsburg Community Center to celebrate the building’s history.

Frederick County Executive Jan Gardner and Emmitsburg Mayor Don Briggs cut the ribbon for the newest historic wayside marker in town, which recognizes the history of the school. Inside the Emmitsburg Library, visitors viewed a new exhibit about the history of the building and other historic artifacts and pictures Bruchey had brought for the event. They also enjoyed refreshments in the community room as they reminisced about school.

Librarian Penny Stockton created the display hanging on the library wall. She hadn’t realized the building was 100 years old until she was creating a similar display about the history of the Emmitsburg Library.

“This building is important to the people here,” Stockton said. “Look at how they fought to keep the school.”

Grade 12 was added to the school in 1949 as part of changes the state made to the education system. A new wing was built that held the cafeteria, gymnasium, and locker rooms between 1950 and 1952.

However, due to a decreasing enrollment, the county-built Catoctin High School in Thurmont in 1969 and combined the student bodies of Emmitsburg and Thurmont into the school.

The last graduating class from Emmitsburg High School was in 1968. Catoctin High opened in the middle of the following school year, and the students were moved to the new school.

“Without a doubt, this building has served as the heart of the community for 100 years,” Gardner said during her remarks at the celebration.

(above) Community members and officials gather for the ribbon cutting of Emmitsburg’s newest wayside marker that depicts the building’s former use as a school.

(below) Memorabilia of the former Emmitsburg High School are shown.