Hopefully, you will never need to be rescued due to an accident at Catoctin Mountain National Park or Cunningham Falls State Park; but if you do, the Guardian Hose Company provides fire and rescue services to an 84-square mile area that includes the parks.  I recently met with Company President Wayne Stackhouse and Fire Chief Chris Kinnaird and watched a training session at the Guardian Hose Company, during which several members practiced setting up a Z Rig, an arrangement of ropes and pulleys used for a rescue.  The rigging gets its name because, when completed, it looks like the letter Z.  Monthly trainings help members keep their skills up-to-date so that they are prepared for any emergency. One previous training provided a refresher on the self-contained breathing apparatus that is needed for firefighters to enter smoke-filled buildings.

The Guardian Hose Company was organized in 1887, and started with hand-drawn fire apparatus and a bell on top of the town hall that was rung to alert the firefighters.  The first fire hall, built in 1890, was located in a garage under the town hall. It was replaced in 1950 and then again in 2007. Currently, the company has two engines, an engine tanker to carry additional water, a rescue squad vehicle, two  brush trucks, a quick response vehicle, and a special air unit, which is a trailer where the self-contained breathing apparatus can be refilled so that firefighters don’t have to leave the scene to refill their air tanks.

The company has lots of family ties; there are members who are brothers, mothers and sons, fathers and sons, or husbands and wives. According to Wayne Stackhouse, many began as junior members and almost forty percent of the members also belong to the ambulance company. They all have different jobs, but they all work together, not only during an emergency, but also during the fundraisers. The biggest events are, of course, Colorfest, the carnival, and the fall festival.

Fire Chief Kinnaird said that Fire Safety Education is an important part of the job. School groups and scout troops learn about emergency situations and when to call 911, as well as escape plans and first aid.  When the children go to the fire station, they get to see the fire trucks and the firefighter’s gear close up.  They can even try on the gear. Promoting fire safety in the home is also encouraged. Contact your local fire department to request a home inspection of your smoke detectors.

The dedicated members of the Guardian Hose Company work hard to fulfill their mission, “to assist in protecting the lives and property of the people of Thurmont and vicinity, and to assist in rescuing persons and conveying them to a place of safety; to extinguish fire and prevent its spreading to adjacent property; in case of collapsed buildings, to rescue all persons and bodies; to clear debris and to remove all weak or dangerous parts of the building.” 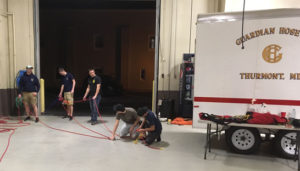