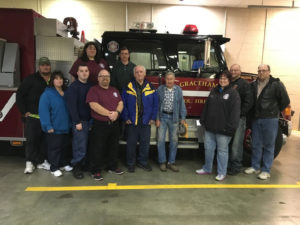 Fighting Fires is their job, but preventing fires is their passion. The members of the Graceham Volunteer Fire Company (VFC #18) take every opportunity to educate the community about fire safety and fire prevention. Each year during Fire Prevention Week, they visit the students at Thurmont Primary School and distribute fire safety information packets. The children get to see and touch the firefighters’ gear so that they learn not to be afraid if they are ever involved in an emergency situation. To make it fun, the firefighters have a race to see who can be the first to put on their gear. Company members also distribute fire prevention literature for adults at many locations and events. During the fall, they set up a table at the Lawyer’s Farm corn maze. Graceham Moravian Church is another location where the members distribute information. In 1994, Kathleen Grady, one of the members, was named Miss Frederick County Fire Prevention Queen, and was later selected as Maryland State Fire Prevention Queen First Runner Up.

Although Graceham VFC #18 was actually incorporated in 1960, the original fire company joined the Frederick County Firemen’s Association in 1936. The station, still in its current location on Graceham Road, was built in 1963, and serves an area that includes Graceham, Creagerstown, and Thurmont Primary School.

The original building had two bays, but renovations added an additional bay. A 100-gallon hand-pulled Ajax tank was one of the first pieces of equipment used by the original fire company. Today, the company has several vehicles: Engine 183 with a 1000-gallon tank, Engine Tanker 184 with an 1800-gallon tank, and a brush truck. They also have two vehicles to provide EMS service.

The most impressive fact is that the department has paid off the mortgage on the station and does not currently owe any money for the apparatus. This is due to the hard work and dedication of the members, as well as the tremendous support from the community. However, the twenty-six-year-old pumper will need to be replaced in the near future. Fundraising is critical. The 25 Club, raffles, and turkey shoots provide the funds needed for new equipment and expenses. The 25 Club is held twice a year and gives the community an enjoyable event, as well as an opportunity to support the department. It includes a dinner and a chance to win cash prizes. Gun raffles are held twice a year and turkey shoots are monthly events. Event dates and times can be found on the Facebook page for Graceham VFC #18.

The department has responded to many different fires and emergency situations over the years. One incident recalled by the members was the 1991 Loys Station Bridge fire. A car on the bridge was set on fire, and Graceham VFC #18 was one of the many departments that responded to the call. The bridge was unfortunately destroyed but was later rebuilt.

More volunteers are always needed and welcome. Assistant Chief Louis Powell would be happy to talk with anyone who is interested in joining the group. If you are interested, you can contact him at ff_emt06_18@yahoo.com.