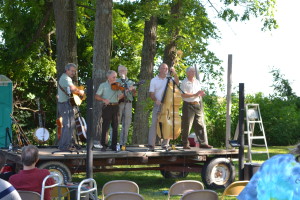 The annual Sabillasville Picnic was held in Sabillasville on Saturday, August 15, 2015. The Bluegrass Chapel Band strummed out old hymns and folk songs while residents relaxed, mingled, and enjoyed ice cream and other goodies.

This long-time annual event is hosted by St. John’s United Church of Christ in Sabillasville, and is held on the church’s picnic ground located off of Harbaugh Valley Road.

Church volunteer, Joan Fry, sent in these diary entries made by the late Annie Harbaugh of Sabillasville:

“This was a beautiful day for the picnic in Bittner’s meadow. We did not go until evening.”

“This was a beautiful day for Sabillasville Picnic.”

“At 11:30 a.m. 70 degrees and still it rains. This is three days of rain already. This was to be the day for the Sabillasville Picnic.”

This was a threatening morning for the community picnic at Sabillasville. The crowd was slim in the daytime but at the festival there was a large crowd.

EVAC Back in Full Operation

The Emmitsburg Volunteer Ambulance Company (EVAC) worked very diligently for fifteen months to meet all the county standards and was placed back in full operation on May 16, 2015. They welcomed six new career staff into their station family with a cookout and a “Welcome” cake for each shift. They have settled in nicely, and their volunteers and career staff are working very well with one another.

EVAC was presented the Zembower Memorial Training Award in June at the annual Maryland State Fireman’s Association (MSFA) convention in Ocean City, Maryland. This award is presented to the company with the best average of training hours in a single year. This is only the second time the Maryland state traveling trophy has been awarded within Frederick County, and EVAC is extremely proud to house it this year.

Company President Marylou Little said, “We worked our tails off in 2014-2015 to not only meet, but to exceed Frederick County’s standards set forth. We welcomed two new members to our family of EMTs this year, and look forward to several more volunteers completing their National Registry EMT status. We have four new members starting the EMT course and wish them great success. We look forward to continuing the best EMS care for you, our Emmitsburg community and surrounding areas. If you are interested in joining our team, please visit us at Emmitsburgems.net or stop by for an application for free training.”

Who Will Be the Thurmont Volunteer of the Year for 2015?

The Thurmont Lions Club is now accepting nominations for the 2015 Volunteer of the Year. Nominate an individual who is making a difference in the lives of others—working with children in the schools, helping at the food bank, a member of a service organization or church, a special neighbor who is always there to help whenever needed, and so on.

The volunteer service work must be done in the area zip code 21788. Forms are available at the Thurmont Regional Library, Thurmont Town Office, online at www.thurmontlionsclubs.com, or by contacting Lion Joyce Anthony at jananny@comcast.net.

Nomination forms are due no later than October 1, 2015. Send your completed nomination form to Thurmont Lions Club, ATTN: Joyce Anthony, P.O. Box 306, Thurmont, MD 21788 or email to jananny@comcast.net. Thurmont Lions Club members are eligible to be nominated with the stipulation that the majority of the volunteer services considered for the award must be performed outside of related Lions Club community service.

The recipient will be announced at the 2015 Make a Difference Day Reception on October 24, 2015.