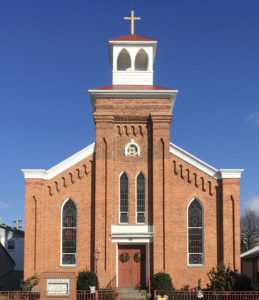 Their congregation might be small but their spirit is great.  The 40 members of the Incarnation United Church of Christ in Emmitsburg gather together to worship in a beautiful historic building, sing along with an enthusiastic choir, donate generously to community organizations, and enjoy each other’s company at the annual picnic.

The church, originally built in 1868 was destroyed by fire in 1950.  Church member Tom Hoke, a firefighter, was on duty the day of the fire.  He said that everything in the building, including the bell and bell tower, the pipe organ, pews, and altar, was completely destroyed.  Only the walls were left standing.  The bell and bell tower were finished before the new church was rebuilt in 1951 so that the annual ringing of the bell on Veteran’s Day would continue uninterrupted. This year, 2018, will be the 100th year that members of the congregation will ring the bell on that day.

Pastor Chris Spruill said that the members of the church are very generous.  Despite the small size of the congregation, they regularly provide donations of food to the local food bank. Special collections during the year provide funds that are donated to the Seton Center Outreach and other organizations as suggested by the Emmitsburg Council of Churches, of which they are a member. They recently collected money for victims of the 2017 hurricanes and, in the past, have provided families impacted by fires with temporary relocation help.

Organist Audrey Glass said that the six-member choir sings at most of the Sunday services.  The choir was practicing for their Christmas Eve Service while I was visiting their church and meeting with Pastor Chris.  I truly enjoyed listening to them sing.

The annual picnic is held in June at Kump’s Dam Park in Emmitsburg.  After a short service at 11:00 a.m., lunch is served. Everyone brings their favorite covered dish, the Women’s Guild provides fried chicken, and Jay Allen cooks hot dogs on the grill. Becki Willard said that there is always “an abundance of food.”  The day of fellowship includes games for children and bingo for the adults.

Incarnation United Church of Christ is located at 124 W. Main Street in Emmitsburg. Members are very welcoming and invite you to join them for worship on Sundays at 9:30 a.m. 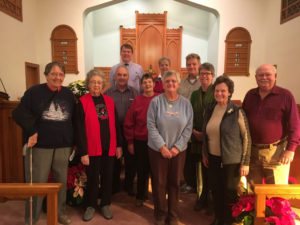