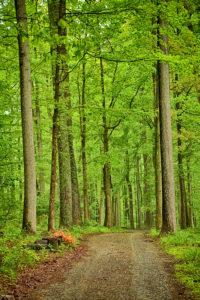 When our National Parks were first established, well over a century ago, painters and photographers created works that inspired Americans and people from around the world to journey and visit those areas and to generate interest in the parks. That practice lives on to this day. The National Park Service (NPS) still reaches out to potential “artists” through its Artist-In-Residency (AIR) program, which is available at over forty different locations.

After retiring from the Federal government with over thirty years of service, including the last fifteen as the director of administration for the Law Department, I decided to “refocus” on my photography. Through a very competitive application process, I was notified that I had been selected as the AIR at Catoctin Mountain Park for two weeks in May. Like other painters, my photos tell a story with images rather than words. I had been very fortunate to have been selected as the AIR at the Whiskeytown National Park Recreation Area in Northern California in 2016, so I had a good idea of what I wanted to accomplish and share with the Catoctin Park staff. Each park asks that the artist donate one piece of their work back to the Park after the residency is completed and to give a workshop/talk to the public during the residency.

My wife and I arrived on Sunday, May 6, 2018, in light rain, which created a bright spring green on our drive up from Virginia that I hoped would make for great photos over the next two weeks. That ride sparked a conversation about our great interest in our National Parks, dating back to the early 1980s with our first trip to Yellowstone and the Grand Tetons,  now having visited over 140 sites to-date.

Based on my prior AIR experience at Whiskeytown Park, I kept a detailed journal of each day, touching on such activities as hikes, the people we met, and notes for future exploring. As part of the program, the park provides lodging to the artists. My wife and I were assigned housing at Camp Misty Mount, a historical complex of cabins built in the 1930s by the Works Progress Administration. On our first day, we met AIR Coordinator Carrie Andresen, a dedicated park ranger, who provided us with an excellent overview of the park, potential workshop dates, introduced other park employees and volunteers, and also talked about on-going events of the park. Afterward, we unpacked the car in now heavy rain and settled into the cabin. I was able to take just a few images of the surrounding area and cabins for the first afternoon; we then made our way down to the Kountry Kitchen in Thurmont for a great dinner.

In addition to creating my own images of the park, I had made an offer to take photos of the park employees and volunteers during my stay. As a result, I managed to meet many employees and volunteers, who all went the extra mile in terms of reaching out to me and all of the visitors to the park. Catoctin Park provided space in the Visitors Center for the display of my photography; so, on the first Monday, we installed about fifteen of my canvas prints. I also provided a daily update of three to four new images for each day at the park, which were also posted at the Visitors Center, as well as on  their Facebook page and mine. Over the two weeks, we hiked essentially all of the trails, and some more than once. I was amazed at the quietness and peaceful feeling of just being in the park. I discovered what many of the locals must know, it really is a hidden gem in the National Park Service. Enjoying American history at the same time, I learned of the creation of the park and its legacy, including training grounds for the Office of Strategic Services (OSS), the predecessor to the CIA, during World War II.

It doesn’t take long in a National Park to find inspiration for creating new work. As an example, a simple, relatively easy walk along the Blue Blazes Trail would lead to hundreds of photos of the stream, trees, flowers and eventually the whiskey still. During one of my photo workshops, two of the participants were quickly laying down on the ground, capturing close-ups of what they described as a rare flower find by its scientific name. On a few days, a heavy fog and mist—which I was excited to see—provided unique lighting for new images. I find that light plays a critical role in finding photographs, and that is why I often go back to specific locations several times to try and capture just the right light. The light can make the difference between a good photograph and a great one. Wandering around also has its benefits when searching for new photographic opportunities, and I took full advantage of wandering while in the AIR program. Every morning involved a short walk from the cabin, within a 200-yard radius, that brought me in contact with many varieties of flowers, trees, and wildlife that often set the tone for the day.

My efforts were geared to try to take meaningful photographs of Catoctin that are so hard to put into words. It has been said that our National Parks are one of “America’s Best ideas,” and I truly feel that is so true. In our parks, I sense a re-connection to nature and the universe that is so needed in today’s fast-paced society and world. As John Muir said, “come to the woods, there is rest.” We were so enthralled with the park, we invited several of our friends from Northern Virginia to travel up to spend the day, and we became tour guides in exploring the park; they all greatly enjoyed the experience.

As Ansel Adams, a world-renowned photographer and friend of the National Parks, had remarked something to the effect … good photographs occur when you figure out the right place to stand. I spent a great deal of time looking for those “right places,” and part of the richness of the Catoctin is that the hiking journey gives as much inspiration as the destination, such as Chimney Rock or the Thurmont Vista. Most days, we walked six to ten miles within the park. With a full two weeks in the park, I never tired of exploring and heading out for more springtime photos, and yet the time raced by us until our departure on May 19.

Being in a National Park gives one time to get in touch with nature, and my time at Catoctin Mountain Park gave me that and much more. We had some time to explore other nearby areas, such as the covered bridges, the Seton Shrine, and the back roads, as well as the hospitality of the folks of Thurmont and the region. Even though the Residency came to an end too quickly, I have already made plans for more return visits, with the changing of the seasons at Catoctin. Since I took many images, one of the difficult and time-consuming tasks has been to edit my work down to the best ten to fifteen prints for future exhibitions. I am hopeful that people will respond to my work in ways that will benefit the park itself, such as new volunteers for Catoctin Park or the Catoctin Forest Alliance. I will also be exhibiting some of my photographs from the Catoctin experience at the ArtSpace Gallery in Herndon, Virginia, later this year.

More of my photographic images in individual galleries by subject matter can be found at www.hotomanva.zenfolio.com.

By artist Jim Schlett, taken in Camp Misty Mount, within 200 yards of his cabin. “The lighting at that early morning, with a light fog, created a sense of being invited in to the forest.”