By TheCatoctinBanner.com On December 29, 2016 · Add Comment · In School News

Each year, senior and freshman class members at Catoctin High School (CHS) are invited to the school’s annual Distinguished Graduate Honoree Induction Ceremony that takes place during school. The Distinguished Graduate Organization, made up of retired and current CHS staff members, started the program last year as a means to show students their potential by allowing them to meet and hear about former graduates of CHS who have made a significant impact on others. One graduate is recognized each year in the categories of Academics, Arts & Humanities, Athletics, Business, Public Service, and former Catoctin Staff Members.

On November 22, 2016, the ceremony was held. The National Anthem was sung by Mr. Richard Troxell, Lily Bean made introductions, and CHS Principal Bernard Quesada gave opening remarks. Current ninth and twelfth grade students introduced each of the inductees.

Tyler Jessee introduced the Former Catoctin Staff Member Honoree, Ann Bonitatibus. Dr. Bonitatibus began her career as an English and math teacher at Middletown High School, then became assistant principal at Frederick and TJ High Schools. She advanced to become principal at New Market Middle, then principal at Catoctin High from 2001-2005. Before being appointed superintendent for the Conejo Valley Unified School District in California in July of 2015, she served several roles within the Frederick County Public Schools system, including director of High Schools, associate superintendent of Secondary Schools, and chief operating officer. Through all of these diverse roles, she created forward-focused visions that were supported by school communities.

Dr. Bonitatibus talked about her experiences at Catoctin, in relation to other jobs she’s held. She shared a timely message about freedom of expression, which was relevant to current times, with the presidential elections taking place.

Phoenix Staub introduced Academics Inductee Joshua Ballew, Catoctin Class of 2003. Dr. Ballew is one smart man! He graduated valedictorian for his graduating class, was awarded the Outstanding Senior Scholar award his senior year, and named a Maryland Distinguished Scholar finalist and National Merit Commended Scholar. He graduated summa cum laude from St. Mary’s College of Maryland, with a bachelor’s degree and a double major in mathematics and physics in 2007. He served as a teaching assistant in the Department of Mathematics and earned departmental awards in both the physics and mathematics departments. He was inducted into the college’s Phi Beta Kappa chapter.

He continued his education by earning his PhD from the University of Maryland College Park in Applied Mathematics and Statistics and Scientific Computation, with his dissertation entitled Mathematical Topics in Fluid Particle Interaction. He is currently a National Science Foundation Postdoctoral Fellow at Carnegie Mellon University, where he continues his research into fluid-particle interaction models and teaches various college math courses. Dr. Ballew has been published in several peer-reviewed journals. Interestingly, he’s written questions for the Frederick County Academic Tournament.

A humble man, Dr. Ballew talked to the students about his time at Catoctin, and his experiences throughout his education.

Outside of law enforcement, Jim is involved in the community. He is a life member and Chaplain of both the Guardian Hose Company and the Thurmont Community Ambulance Service. He served for several years as a founding member of the Board of Directors of The Source Christian Radio AM 1450, WTHU. Jim is also an ordained pastor, and the founding pastor of St. John the Baptist Antiochian Orthodox Church in Lewistown.

Jim’s message to the students was that life is full of twists and turns, but living in service is a very fulfilling path.

Owen Bubczyk introduced the Athletics Inductee, Kathy Messner Stevens, CHS Class of 1998. Kathy is a true inspiration. Two weeks after graduating from Catoctin, she was driving a vehicle that was hit from behind and pushed into the on-going path of a tractor trailer. The near-fatal auto accident almost left her paralyzed. It is truly awesome to listen to the experiences of this great athlete, who transferred her drive to succeed into a drive to survive and thrive. The physical devastation of the auto accident could only be met head-on with true grit and faith as she battled to recover from a broken neck, fractured back, ruptured spleen, and punctured lung, among other injuries.

Prior to the accident, Kathy was a champion athlete: a two-time national high jump champion; twelve-time Maryland State Champion; county champion; and held MVAL, regional, and championship titles. To this day, she holds state records for high jump and triple jump.

Before the accident, she had earned a full athletic scholarship to Penn State University. After intense rehabilitation and physical therapy, Kathy joined the Penn State Track and Field team seven months after her accident. She competed all four years, and served as team captain her senior year. She met, or bettered, her high school performances in the jumping events and earned the Nittany Lion True Grit Award.

In 2012, she was inducted into the Alvin G. Quinn Frederick County Sports Hall of Fame. She is currently a private coach, and assists at Oakdale High School. She has also coached for the Catoctin Youth Association and Catoctin High School

Kathy’s degree from Penn State was in Kinesiology. She’s currently earning her Master’s Degree in transpersonal psychology from Atlantic University. She owns her own hypnotherapy and massage business, Transform & Revive, LLC in Woodsboro, Maryland.

Kathy’s message to the students was very inspirational, siting faith and the unwavering support of her mother and her late father to sustain the “true grit” she exemplifies in her achievements. Kathy has a nine-year-old son, Zachary Evan.

Adam Fields introduced the Business Inductee, Deb Abraham Spalding. A common path for graduates of CHS may be to attend Frederick Community College and then move on to a four-year college. Deb did this, graduating from Towson State University with a B.S. in Physical Education and concentration in sports management. That degree allowed her to pursue the profession of providing recreation services, which she did while serving as recreation superintendent with Frederick County Parks and Recreation.

In 2003, she resigned from Parks and Recreation to start her own business. She is currently the publisher and owner of the local newspaper, The Catoctin Banner, and owner of E Plus Copy Center and Promotions in Emmitsburg. She has also coached field hockey and basketball for various organizations.

Deb related to the students by identifying similarities they all experience as students at Catoctin. While a student at Catoctin, Deb was vice president of her sophomore class and president of her junior class. She played field hockey, basketball, and tennis, and participated in chorus and school musicals. She was raised on the mountain in Foxville, attended Sabillasville Elementary School, and then Thurmont Middle School.

She is a graduate of the Frederick County Chamber of Commerce’s Leadership Frederick County Program, attended Oglebay School of Management, and completed coursework towards a Master’s degree in Parks and Recreation Management at Frostburg University.

She has two children, Lydia (CHS Class of 2015) and Hayden (current CHS junior) and lives in Thurmont.

Hannah Belt introduced the Arts & Humanities Inductee, the greatly talented, internationally-known lyric tenor, Richard Troxell, Class of 1979. Richard has been thrilling audiences with his beautiful voice in leading roles in opera houses and on concert stages around the world.

His career skyrocketed when he appeared as Pinkerton in Martin Scorcese’s film version of Madame Butterfly in 1996. Not your normal opera singer, Richard’s career has ranged from being a recurring guest on The Tonight Show Starring Jimmy Fallon to climbing out of the sewers of Seville as Don Jose at Sydney Opera House in Carmen, to singing the National Anthem for Major League Baseball games to completing his latest CD, Classic Broadway.

In October of 2015, Richard sang and danced his way on to the stage of the Metropolitan Opera, debuting in Michael Mayer’s “Rat Pack” production of Rigoletto while at the same time covering the road of Der Maler in Lulu and Alfred in Die Fledermaus.

Richard started singing at the age of four, along with his parents, belting out Broadway tunes at Lions Club benefits and singing hymns in the church choir. He received his operatic training at the Academy of Vocal Arts in Philadelphia, Pennsylvania. He currently resides in the countryside of Chester County, Pennsylvania, with his wife, Lisa Lovelace, who is a dancer and choreographer, and their two sons, Wilder and Shane.

His message to the students was that you can achieve anything you set your mind to. Catoctin is a great place to start.

For more information about his program or to submit the name of a nomination for a future distinguished graduate, please email Keith Bruck at Keith.bruck@fcps.org. 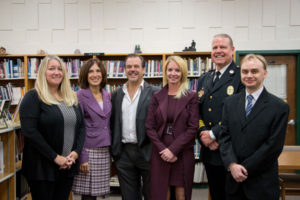