By TheCatoctinBanner.com On November 29, 2017 · Add Comment · In School News

The Catoctin High School (CHS) cast and crew of Auntie Mame  demonstrated remarkable versatility during their performances on October 27 and 28, 2017. The story is about an orphan, played by Casey Ecker, who goes to live with his eccentric aunt, played by Jean Pembroke.  Ecker and Pembroke, who both have previously performed on stage at CHS, were joined by a group of students who played multiple roles during the show. Some of these cast members were making their stage debut during this performance.  Sophomore Isabel Rozo did an amazing job playing five completely different parts in her first-time performance. She not only had to change costumes for each character, she had to switch personalities.  The story took place over many years, so there were a lot of costume changes for all of the characters, not only those with multiple parts. Justin Peters, another student who had never been in a performance, played four different characters. Matthew Imes also portrayed four characters during the show. Christopher Reed, a senior at CHS, has been in many productions since his freshman year.  He played three very diverse characters during this show. CJ Corbin made his stage debut by playing three parts. Addison Eyler also portrayed three different characters. Zoe Scheetz played two characters in her first on-stage performance. Iain Hallowell and Teairah Velasquez also joined the cast. 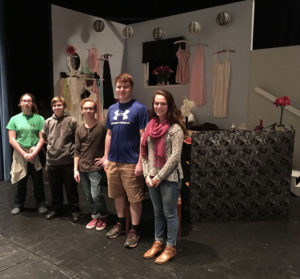