On November 5, 2016, at the Maryland Association of Agricultural Fairs and Shows (MAAFS) annual convention in Ocean City, Maryland, C. Rodman Myers of Thurmont received the 2016 Maryland Fair Person of the Year Award. The Fair Person of the Year recipients are outstanding individuals who exemplify the best in our industry by believing in and continually promoting fairs, shows, and festivals in Maryland. The MAAFS Fair Person of the Year is a peer award. Any MAAFS member may nominate a candidate, based on criteria developed by the MAAFS Board of Directors.

For more than sixty years, Rodman has been one of the driving forces, along with agriculture teacher Bill Baker (who is now deceased), behind the annual Thurmont & Emmitsburg Community Show. This Show is sponsored by the Thurmont Grange, Catoctin FFA Chapter, and Catoctin FFA Alumni and attended annually by more than 7,000 people. His work with the Maryland Agricultural Fair Board has resulted in funding, which supports the show. Rodman oversees many details, including volunteer recruitment, advertisers for the Community Show booklet, set-up, commercial displays, judges, entertainment, door prize donations, and many other activities. In 1976, during our country’s Bicentennial, a community flag ceremony was added to the show, and has grown to include about thirty-five community and civic organizations each year. The Community Show just celebrated its sixtieth year in September and had approximately 600 exhibitors enter over 3,200 exhibits. There were about 140 new exhibitors, a twenty percent increase from 2015. Rodman is very appreciative that his entire family helps with all aspects of the Community Show.

While the Community show takes a lot of his time, Rodman is also a member of the Thurmont Grange for sixty-eight years, and is currently serving as Master. He has participated in every Grange community service activity, including donating dictionaries to third grade students, delivering fruit baskets to residents at their homes or in nursing and rehabilitation facilities, and helping to dip ice cream at the Catoctin Colorfest—just to name a few.

Rodman has also volunteered for activities in the Frederick Fair’s Farm and Garden Building with Frederick County Pomona Grange’s corn shelling demonstrations and hospitality booth. He also served as the Frederick County Pomona Grange Master and the Maryland State Grange Master, each for four years. Rodman is also a life member of the Catoctin FFA Alumni, where his vision, time, and farming experience has positively impacted the program. Rodman is known for his genuine love of the community, an ambassador for agriculture, and helping residents grow and prosper.

He has also been a member of St. John’s Lutheran Church in Thurmont for over sixty years and has served on various committees.

Rodman and his late wife, Jean, own and operate Catoctin Mountain View Farm and have four children: Patty, Cheryl, Bobby, and Andrea, two sons-in-law, one daughter-in-law, seven grandchildren, one great-granddaughter, and one great-grandson. 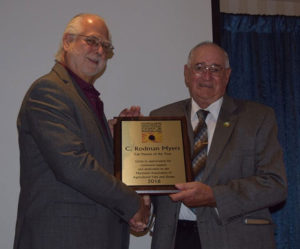