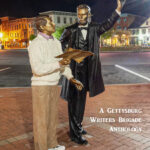 By TheCatoctinBanner.com On December 29, 2020 · Add Comment · In Community News

Gettysburg is where President Abraham Lincoln gave his most famous speech. It is also where he wrote parts of the Gettysburg Address. The town and its history have inspired many other writers to express their feelings and dreams on paper, whether a nonfiction examination of the historic battle, a story of a restless spirit in town, or poetry about the people. Gettysburg has inspired many authors, including the members of the Gettysburg Writers Brigade.

The Brigade was organized in January 2010. Its mission is simple: A group of local writers willing to meet weekly to share and discuss the writing process, writing techniques, publishing, promotion, and marketing, and to help writers work through all these endeavors.

“We have 120 members, although, at any weekly meeting, attendance runs from 6 to 12. Our membership spans the gamut from novice writers with ideas for stories to published authors,” Brigade founder Will Hutchison wrote in the anthology acknowledgements.

Over the past ten years, the group has met over 500 times. The majority were held at O’Rorke’s Eatery and Spirits at 44 Steinwehr Avenue in Gettysburg. The group chooses the topic for each meeting. One member leads a discussion, whether it’s on writing technique, marketing, publishing, finding an agent, or something else.

Four Score & Seven Stories Ago is a collection of fiction and nonfiction about Gettysburg. Eleven talented members of the Gettysburg Writers Brigade created stories related to the most famous small town in America. Some of these stories include:

Sgt. Francis Cassidy and Cpl. Paddy Quinn have looked danger and death in the face while fighting with the Union Army. Their friendship and love of their fellow soldiers of the “Irish Volunteers” now takes them to the Battle of Gettysburg, where they must meet their destiny.

Nestled in the rows of flat grave markers in the Gettysburg National Cemetery lies a Veteran of World War II who may be one of the few that knows the true story of the Kennedy assassination.

The death of a father sends a Gettysburg family into crisis. Dark secrets from the past come back to complicate the life of a son struggling to help.

The small garden of her Gettysburg farm was often busy with guests, mostly the ghostly type, and then someone from Abigail’s past surfaced there… as she dug him up in her flower bed.

Hometown hero or traitor? One Civil War soldier’s views of life, family, and friends in Gettysburg, inspired by true events.

The anthology project began last August when a group member suggested the group publish an anthology as a way to put all the skills the group had been discussing over the years into practice and offer novice writers a chance to have a professionally published credit.

The members responded enthusiastically. Eleven members have pieces in the anthology (six are published for the first time). Catoctin Banner editor James Rada, Jr. wrote a story about an aging Veteran’s walk from southern Virginia to Gettysburg to die on the battlefield called, “Finishing the Charge.” Other members helped with different aspects of the project, such as editing, formatting, and marketing.

Within a few days of being published, the book hit the Top 10 in three Amazon.com categories and was the no. 1 new release in several.

Frederick resident Kerry Springle wrote a story called “Past Attentions” for the anthology. “Getting published was a dream come true,” she said.

Profits from the book’s sales are going to be donated to the Gettysburg Area Education Foundation, which supports children’s literacy. The book sells for $14.95. It is available on Amazon.com or from E Plus Graphics in Emmitsburg.

The group has already started planning to put out a second anthology sometime in 2021.

New members are welcome. The group meets weekly, although members aren’t required to attend all meetings. To be kept up-to-date on what the meeting topics will be and other information about the group, sign up for the Gettysburg Writers Brigade on Meetup.com.