A Visit to the Homeland

John Kinnaird has called Thurmont home since he was seven years old. He loves it and couldn’t imagine calling anywhere else home. Still, he occasionally feels the pull toward the land of his birth. He recently had a chance to visit Scotland once again with his wife and two of his grandchildren.

His last visit to Scotland was three years ago. He was able to take his mother back to visit relatives in Aberdeen one last time.

“When she died, I realized that I had aunts in their nineties, and I thought I had better go back and see them before they are gone,” said Kinnaird.

He also decided to take along his granddaughters, Megan and Madison. They were about the same age his own daughters had been years ago when he took them on a trip to Scotland. “They are old enough to be able to appreciate what they were seeing.”

The two-week trip saw them visiting Aberdeen, where Kinnaird had been born, including the house where he was born. They visited other towns, boated on a river, toured castles, and kept an eye out for the Loch Ness Monster. They saw rolling hills and cliffs that fell away into the North Sea.

The number of his family members has never been large, and he only has two aunts and a cousin who still live in Aberdeen.

One place that Kinnaird got to visit that he always wanted to see was Beamish. It is called an open-air, living museum because the town is set in different periods of the region’s history to show its growth and industrialization.

At Loch Ness, Kinnaird got his granddaughters excited when he told them he was going to show them where their mother had seen the Loch Ness Monster. They were let down when he only showed them an old replica of Nessie floating in a lake.

All in all, they traveled 1,800 miles during the trip, trying to squeeze in as many sights and memories as they could.

This was Kinnaird’s fourth trip back to Scotland, and he doesn’t plan on it being his last. 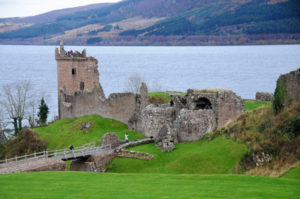 Urquhart Castle sits beside Loch Ness in the Highlands of Scotland. 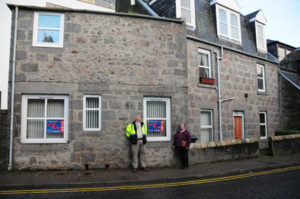 While visiting Aberdeen, Scotland, John Kinnaird and his wife, Karen, stand in front of the house where John was born.