CPT David Lee Burrier, son of Lonnie and Barbara Burrier of Thurmont, recently became Company Commander of the HHC, 127th Engineer Battalion, 1st Brigade Combat Team, and 82nd Airborne at Fort Bragg in Fayetteville, North Carolina. CPT Burrier was a 2004 graduate of Catoctin High School, and a 2008 graduate of The Citadel in Charleston, South Carolina, where he earned a Bachelors Degree in Civil Engineering, attended Airborne School, and then commissioned through ROTC. After graduation from The Citadel, CPT Burrier attended the Basic Officer Leader Course II at Fort Benning, Georgia, the Engineer Officer Basic Course at Fort Leonard Wood, Missouri.

CPT Burrier was first assigned to the 27th EN BN, 20th EN BDE at Fort Bragg, where he served as a Platoon Leader in the 264th Route Clearance Company and deployed to Afghanistan in 2010. During the deployment, CPT Burrier also served as the Executive Officer for the 161st Engineer Support Company, with which he redeployed back to Fort Bragg. In May of 2011, CPT Burrier took over as the Olmsted Division Executive Officer, Louisville District USACE, stationed in Paducah, Kentucky. During his time in the Louisville District, CPT Burrier earned his Professional Engineering Degree in the state of Kentucky.

CPT Burrier is married to his wife, Hunter, for five years, has one son, Mason, and resides in Raeford, North Carolina. 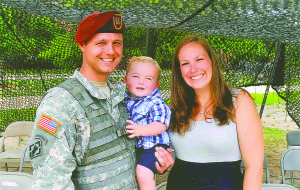 CPT David Lee Burrier is pictured with his wife, Hunter, and his son, Mason.